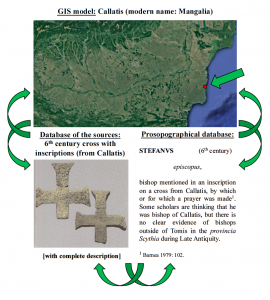 Sketch of interaction between the GIS model and both databases of the DANUBIUS project.

The ambitious and innovative character of the project, coupled with the importance of its consortium, implies a certain degree of organisation and devolution of the tasks. The overall objective of the DANUBIUS project is the historical and archaeological study of the ecclesiastical organisation and networks of the Danubian provinces of the Later Roman Empire, viz. at the period of the Christianisation of the region. Since there has been no synthesis work on this topic since 1918, the ground for a new history of this question will be prepared through two main databases: one devoted to the heuristic of sources, the other to Christian prosopography. In order to provide the first of these databases with unpublished data, a case study in the field on the late Roman site of Zaldapa (Krushari, Bulgaria), which has so far been little studied, despite its major historical importance, will complement the work. The whole forms the three WP around which the DANUBIUS project is structured. Brought together in a GIS model, this collection of data and case studies will be the laboratory for innovative conceptual tools and a new synthesis.

The GIS model – The GIS model that will be developed is placed at the apex of all three WP, because it will bring them all together in a single tool. The overall idea is to produce a tool that will allow an accurate geo-location for the provenance of Late Antique Christian artefacts, buildings and inscriptions, with immediate access to references from literary sources concerning ancient Christianity. Also, the tool will refer to the available Christian prosopographical information for each site. By combining all this information, it will then be possible for the user to gather very quickly all the necessary material for the study of Christianity in a given place (city, group of cities, region, etc.). Moreover, the inclusion of the prosopographical information will also enable researchers to trace the movements of individuals and to establish their networks of relations. Visually, the GIS model will be an interactive map, and users will be able to run it according to different criteria. Results will appear as an atlas of sites matching these criteria. The user will thus be able to select each site and look for the geographical information and other data. From the GIS model, it will be possible to enter the databases – which will have to remain independent, even if interconnected – and vice versa, to enter the GIS model from the databases.

Development on Chronocarto (in progress). 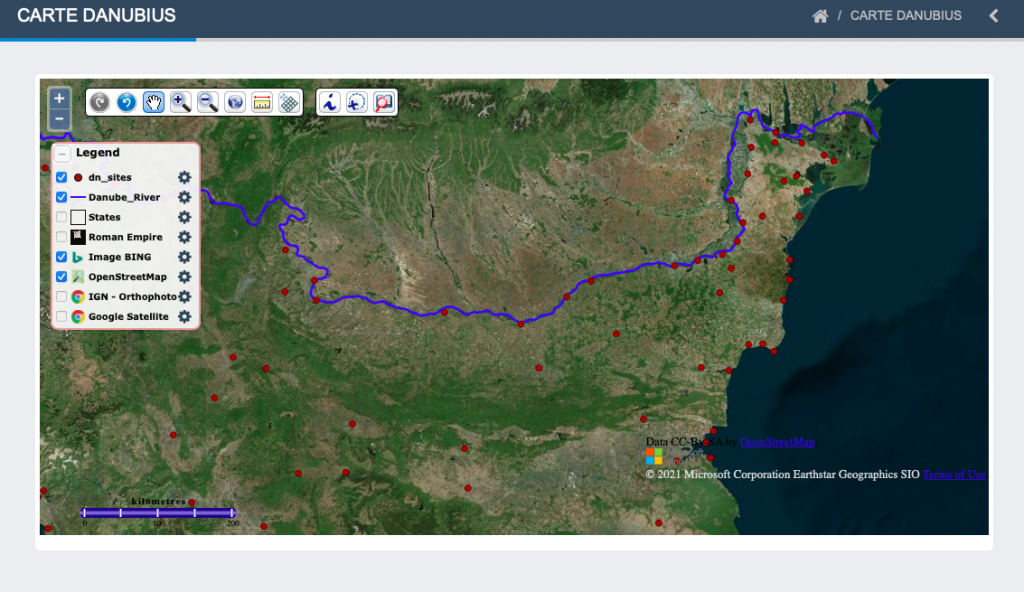